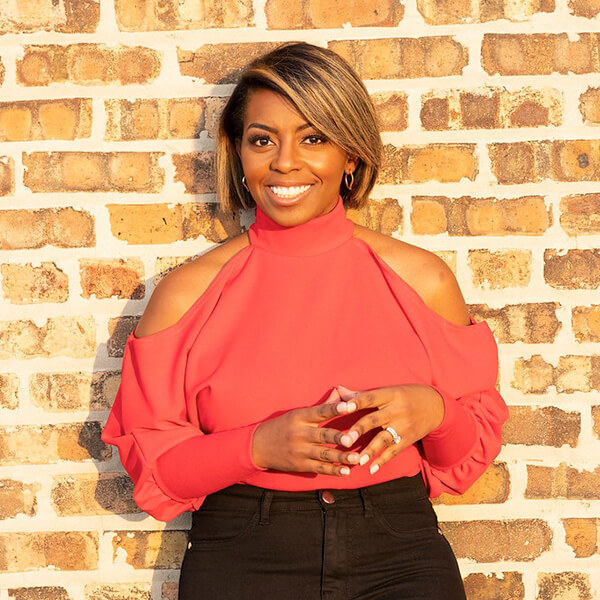 Dani Jackson is a powerhouse businesswoman and creative professional who currently serves as a Vice President of Influencer & Multicultural Marketing at Edelman. Born and raised in Chicago, The University of Illinois graduate landed her first opportunity in the advertising industry as an intern at Leo Burnett through the 4A’s Multicultural Advertising Intern Program (MAIP). After her internship, Dani decided to pursue her passion for storytelling after receiving a scholarship to SUNY Buffalo where she earned her MFA in Media Arts Production. While in graduate school, Dani returned to MAIP as an intern program coordinator at the 4A’s in New York. At the conclusion of the internship, Dani decided to stay in New York City. Without a full-time gig lined up, she tapped into her entrepreneurial spirit and her passion for music launching ADArtist, where she curated showcases for Sony Music and Universal Music artists at JWT NY, Deutsch, and Leo Burnett NY. Through ADArtist, Dani also provided ADCOLOR with some of its early music compilation features from Jazmine Sullivan, MC Lyte, Hypnotic Brass Ensemble, and Marsha Ambrosius.

During this time she also joined Street Knowledge Media, a marketing and production crew that consisted of Dani and two friends. While the trio ran a blog and covered New York celebrity events, their first big contract was with Sony Music – Cinematic Music Group, launching the career of Nipsey Hussle. The small but mighty team did it all including developing the social media strategy, pitching media, and creating content. While she had only taken one class in web design, Dani convinced Sony that she could also build Nipsey’s official website, which became the number 2 trafficked site for Epic Records.

In 2010, Dani returned to Chicago for an associate producer role at Leo Burnett. Over her five years at Leo Burnett, Dani worked on big brands including Kelloggs, Samsung, Nintendo, and Allstate. She also leaned into her D&I roots, leading the Chicago MAIP Alumni Association, joining the ADCOLOR Advisory Board, and eventually becoming the lead producer of Leo Burnett’s NO2.66 initiative.

In 2015, Dani joined Havas as a Sr. Producer to launch Havas Annex where she continued to work on big-budget integrated and experiential programs. Still, the highlight of her time at the agency was producing Havas’ premiere #BlackAtWork Jobstacle course that challenged people to consider how microaggressions impact the work experience of Black employees. The installation won a Chicago Addy Best in Category.

At the top of 2018, Dani transitioned into production at Edelman where she led work on Kellogg’s, Eli Lilly, Sanofi, and other brands. She also joined Edelman’s GRIOT employee network group board and the Off The Street Club Mentors program. In June 2019, took a leap and reduced her production responsibilities to lead DE&I at Edelman Chicago where she combined her years of experience with industry as well as community organizations and being a strategic creative producer. In this role, Dani became a DEI training facilitator; a Steward of Edelman’s Employee Network Groups; created The Chicago Inclusion Council to increase productivity against regional DEI goals, and implemented a protocol and programming that led to higher participation from senior leadership. Her impact spread beyond Chicago, with Dani launching the Hispanic Alliance for Career Enhancement (HACE) Multicultural Leadership Program across the US and Edelman’s Authentic 365 podcast across their international network.

Dani began providing clients with DEI and Multicultural consumer strategies in 2019. In 2020, with the COVID pandemic and the murder of George Floyd, Breonna Taylor, and continued violence, the counsel that she had been providing became a pivotal client priority. Her flexibility to work with C-suite execs during crises, provide employee engagement counsel, supplier diversity counsel, and strategically approach creative solutions led to her being promoted to VP, Multicultural with a specialty in Diversity, Equity & Inclusion. Most recently, Dani has transitioned to align her creative passion for artists moving onto Edelman’s Influencer team.

In 2019, Dani independently launched The Cre8tors to connect diverse high-level artists whose work impacts culture with opportunities to utilize their skills to reshape the world. Pairing changemakers such as David Banner, John Jennings, Shala Akintunde, and Indie 184 with brands and agencies that seek to elevate their experience. The Diverse Voices in Docs alumni also flexes her artistic muscle through Backside Stories, a project that personalizes the complex portrayals of Black and Latina women, deconstructing ideals of womanhood.

Dani continues to be a community leader as a part of the Chicago Ad Federation Diversity Thought Leaders’ Council and on the boards of Off The Street Club and Free Spirit Media. With storytelling and community at her core, Dani seeks to live her best life through championing diverse perspectives and people.